← Previous: Secretive, Undemocratic Selection of School Administrators Next: How NCLB is Still Destroying Reading for Children → 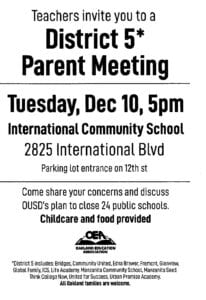 On December 5 2019, the Oakland teachers union (OEA) held a 3 PM parents meeting at Jefferson elementary school (called Global Family) to discuss the upcoming school closures. Global Family is the public school that has been forced to cohabit the large Jefferson campus with a charter school since 2005. The meeting had to be held outdoors in front of the school because the union was illegally denied access to the school building. The principal is a former bilingual teacher who is pro-union and pro-teacher; but he denied access to the building on orders from his bosses. This was an outrageous unfair labor practice and an insult to the working class immigrant community. Similar meetings have been held inside the schools recently in the upper income hills neighborhoods, a clear sign of discrimination against the working class mostly Latino Jefferson community.

The main message of the meeting was to inform parents that Jefferson/Global Family may be impacted by the projected school closings throughout the Oakland Unified School District (OUSD). The union has learned that children from newly closed schools will likely be transferred into Jefferson and other nearby public schools, and that there has been no open discussion by the district administration about how children’s unique educational needs will be met in this drastic transfer across neighborhoods. For example, Jefferson and other nearby schools have large bilingual education programs, which are popular with parents. It will not be appropriate to place non-Spanish speakers and children who have not had previous bilingual instruction willy-nilly into Jefferson’s bilingual classes, and such placements will have negative effects on both the new and existing students. Also, class sizes at Jefferson are likely to increase with more students who don’t live in the area.

About 40 parents attended this meeting, which was conducted in Spanish. Numerous parents spoke out against the transfer proposal. Among other things, they expressed hostility at the charter schools because they exclude certain students and refuse to offer bilingual education. Several gave personal examples. The parents wanted to know how they can stop the transfers and the spread of charter schools. The two teachers who conducted the meeting are the school’s union reps. They said that the community should change the composition of the school board by voting in the 2020 elections. They encouraged the parents to attend a larger union-sponsored parents’ meeting on December 10 at a nearby public school that has a large bilingual education program and Latino community. (see the attached flyer)

During the meeting, I was asked to say a few words because I have a long history in bilingual education, my wife was a bilingual teacher at Jefferson for 20 years, and I’ve lived in the neighborhood for 45 years. This is the gist of what I said: